Back to the Basics; what do do when the boat ain't runnin'

Things start where they often do.  The truck. 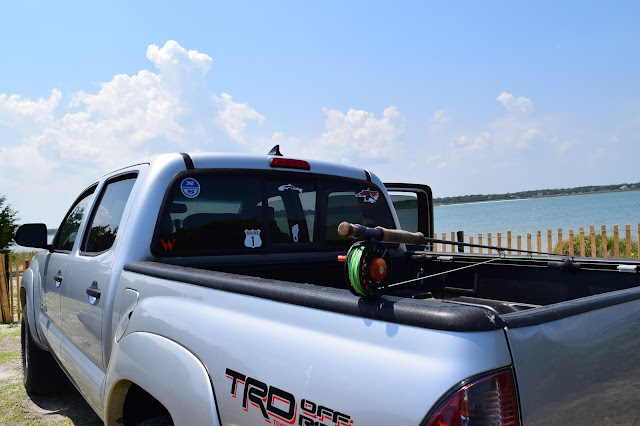 Throw the kayak in there, since the skiff's in the shop, and stick the 8 weight through the sliding back window.  Grab your flies and a water bottle.  Paddle and a life jacket too.  Good to go. 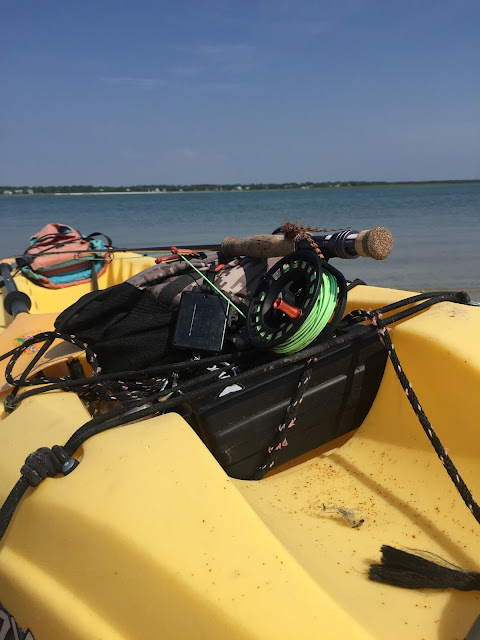 Paddle away from the inlet, with the tide pushing in.  It's almost effortless, peaceful in the morning calm, gliding through the clear water, almost Caribbean-like, not yet muddied up as it will be soon, once summer sets in.

Skirt into a sizable creek on the southern side of the channel, water rushing in.  The wind's not come up much yet.

Drift, through the winding bends - it's almost like a mountain stream with thick undercut banks, but here no brown trout lie in wait, here the bank is devoid of smoothed river stones and instead is embedded with thick dark mud and oyster shells and spartina grass roots, full of organic smells.  You paddle, softly, quietly, past oyster bars, thick with that dark mud, shore birds treading slowly and deliberately, hunting for food amongst the dead and living shells.

As you ease closer to the grass, the water's taken on a more colored tint, slightly muddied but not fully tea-colored like springtime piedmont and coastal plain rivers.  It's just that the crisp blue-green has got some slight haze in it, sediments carried in, pulled off the banks of the creeks with the tide.  Not much activity yet, as you strain the read the water for the movement of fish.  Some small finger mullet here and there, pushing water, creating a wake.  But no boils on the surface, no shrimp fleeing, jumping, desperately trying to escape hungry redfish or speckled trout.  Not much "fish-tivity," as some may have heard it called.

Now you're in an pocket of open water, right before the sharp spartina grass gets thick, and as soon as you know it, boils and small whirlpools the size of dinner plates are visible all around the kayak.  No doubt now, you've interrupted a school of redfish waiting on the tide to move into the grass to feast.  "#$@!#$!!!!" and another expletive or two later, you move on to the south, looking for more pockets like that one.  You know they're there, small schools, hungry, eager.

It's hard to see sitting in the kayak, almost at water level, so you ease out, hoping you don't sink too far into that thick marsh mud, hoping your exposed skin above your shoes doesn't find the edge of an oyster.  Wade on, carefully, deliberately, doing your best to not spook anything, eyes scanning ahead for movement, maybe a tailing fish if you're lucky.

It's the hunt that makes it so fun, on the prowl, fly rod in hand, on the ready.

The tide's inched up as you move through the edge of the grass bordering next open pocket, and then you see, 20 maybe 25 yards up, small, translucent shrimp in flight, jumping, wishing they could grow wings and fly to escape.  You hear the splashing and pushing of water somewhere ahead, in the grass on the far edge of the opening, and you know it could only be caused by the bullish head of a redfish.

So carefully and quickly you strip line off your fly reel, and cast, sending more and more line out before releasing and letting your line and leader and shrimp-patterned fly roll out.  You strip in line, a haphazard cadence of strips, not knowing what they want.  Nothing.  Then you raise the rod, about to cast again, and out of the haze rises a nice red, intent on your fly as you lift it out of the water.  More expletives.  "You might've just blown it you *&^%#!"

But no furious wakes, no spooked fish.  You hear another crash.  You wait.  Waiting to cast is hard when you enjoy the casting so much.  Then you see a boil again on the far edge, and you cast again.  Money cast, right where you wanted it.  Strip, strip, BAM.  Strip set.  He's on, and you've gotta keep tension, you've gotta play him some, but not too much.  He swings right as you're in a frenzy to get your extra line back on the reel, and you turn him, but then he runs for the grass.  Now you've got him on the reel, the drag's loose so he takes line easy,  no problem, but then you inch him in.  It's a bit more of this give an take, with cautiousness about losing fish a few too many times in the past, and then you've grabbed him, snapped a couple photos for proof, and he's off. 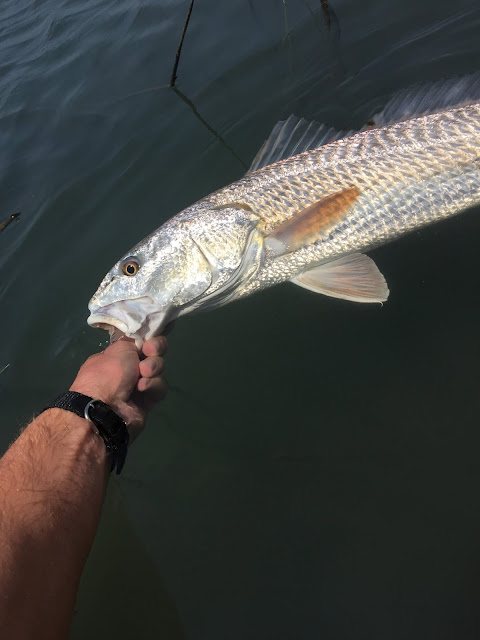 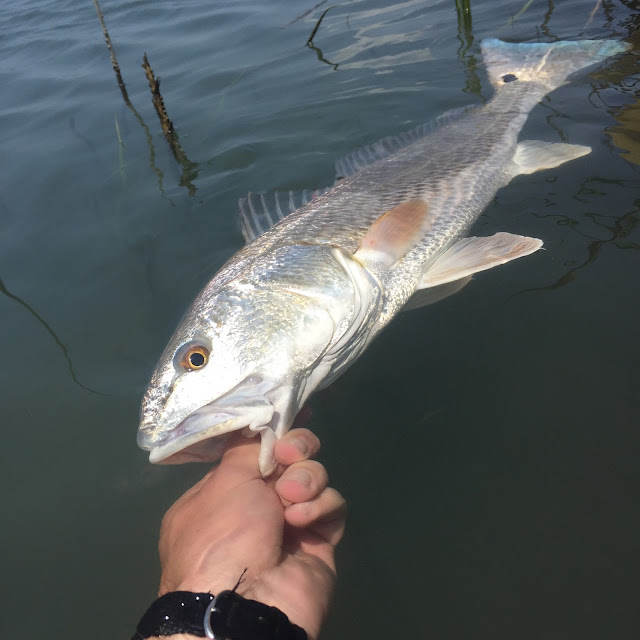 The morning goes on, and you see more fish, almost stepping on a really nice one suspended low in the flooded grass, but no more come to hand.  But that's fine.

Salt's good, good for the soul.  The clear water, the light sand, then the mud and activity and incredible productivity of the salt marsh.  It has this cleansing effect, this power to reduce you down to the simplicity of what really matters.  All that matters is a fly rod and a box of flies, and the morning hunt for a quarry that's sometimes so darn picky, but sometimes will do it just right, inhaling your fly.

When things don't go your way, when the fish are picky or spooky or just not interested, it's still a good day on the water, boiled down to the basics, by yourself or with good friends. Fish on on the line or not.  Fishermen like to stretch the truth sometimes, but this here is truth as pure as it can be. 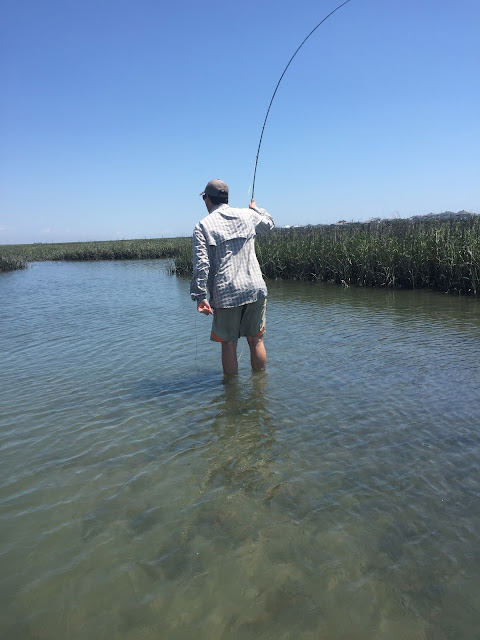 It's an amazing thing. 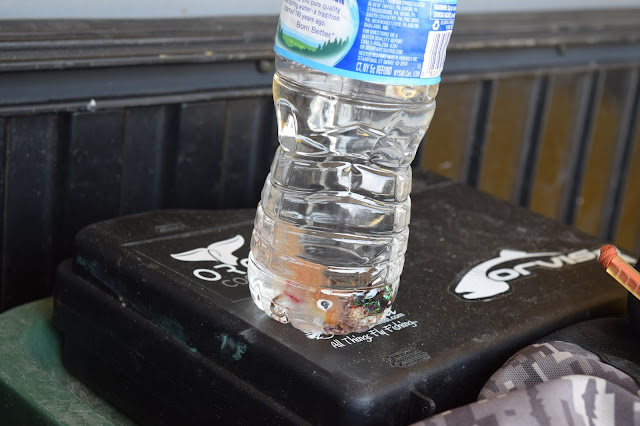 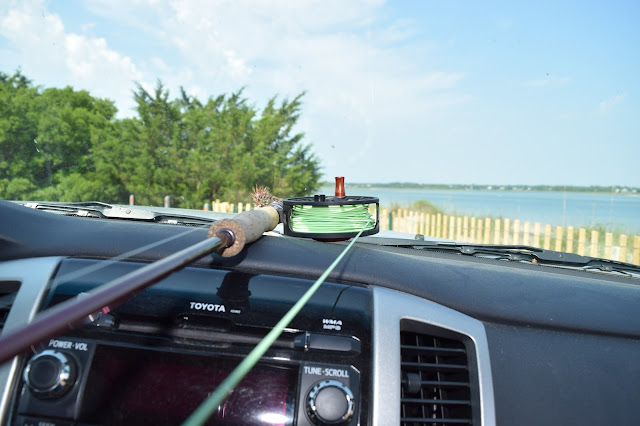 Things often start with the truck.  And likewise, the truck is where things often end.
Posted by robdanielh at 1:22 PM