A Week for the Ducks, the first half 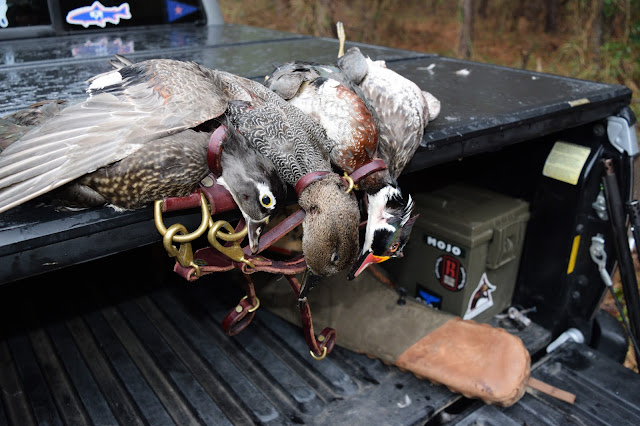 The week truly began a day early.  Not Sunday the 18th, but Saturday the 17th. Opening day of the final split of duck season.

Two buddies, my brother, and I rode through the dark to a local stickpond, not more than 15 minutes away.  It wasn't bone-chilling cold, but it was cool, and it was cloudy, with a thick, low, ceiling.  We didn't grab many decoys, just a handful of wood ducks and a few mallards and we headed down to the swamp.

You sense your way through the dark, through the briars and pines, gradually losing elevation, a slow drop down into a Eastern Carolina version of a valley, a creek bed, dammed up by beavers or the remnants of an old millpond dam, long overgrown, as the wild slowly reclaims what it always truly owned.  You think about how the birds have flown before, the direction from which the sun will be rising, the direction the wind is blowing (as it hopefully is), and you throw out the decoys based on that rough calculation.  It's all all part of the strategy, of the small adjustments you can make while duck hunting that make the sport forever exciting, forever rewarding - much like changing flies, changing weight, or changing tippet size while trout fishing. 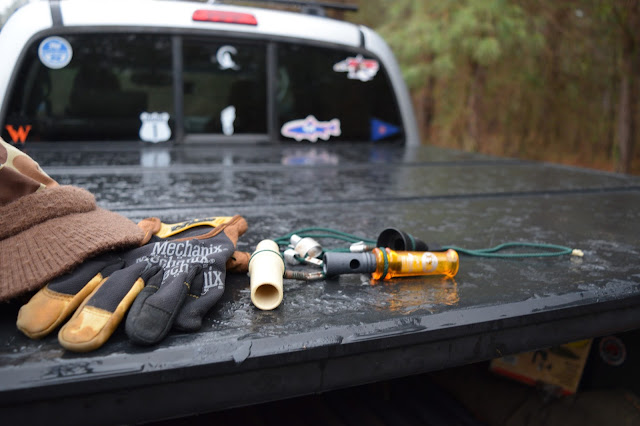 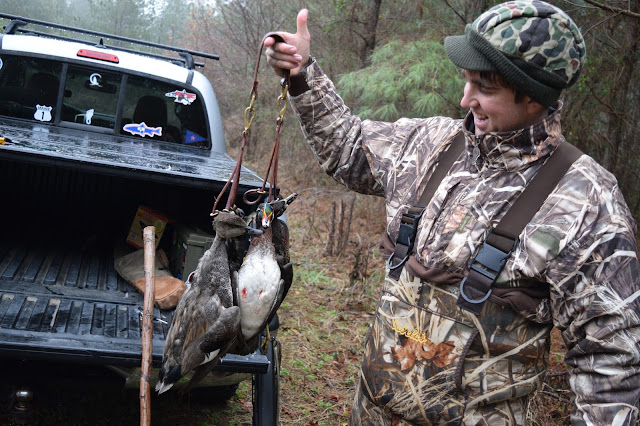 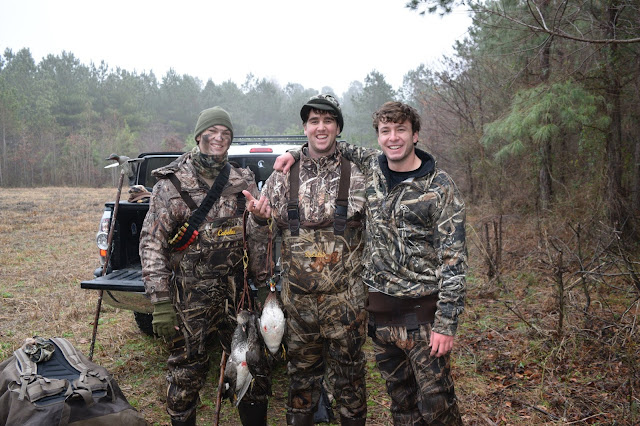 It's not a long shoot, a typical Carolina swamp hunt for the most part - largely wood ducks - but also a non-typical Gadwall that sees the decoys and plummets down out of the stratosphere, wings locked.  A nice bonus for sure.  Then it's off to Flo's Kitchen for biscuits almost the size of your head.

Sunday goes on its way, and Monday shows up.  Now the truck's pointed further east, towards Creswell in Tyrrell County.  We've got a public land draw hunt at Lantern Acres Game Lands.  These draw hunts are a great thing.  Two other friends and I have lucked into at least one draw hunt every year for the last three years, and they are certainly worth the five bucks per game land or wildlife refuge to throw your name in the hat.  Too, they're a time when some high school buddies can catch up, escape school or work, and narrow life down to the bare bones, to some whiskey and a fire and some ducky-spitting rain and some thick mud and a lot of hard work to get on the birds. 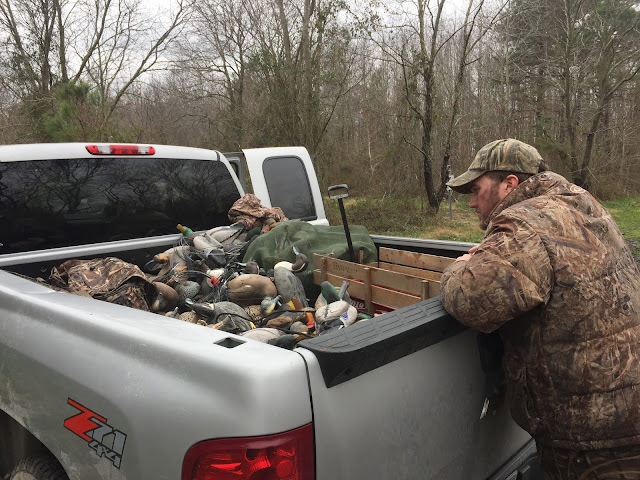 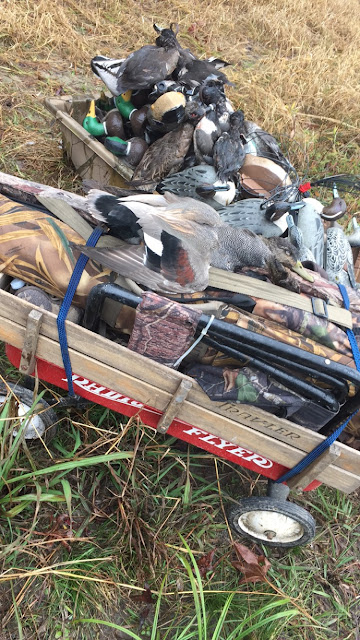 You've got to love it when your predication about how the birds will work pans out just how you planned.  It's not just dumb luck.  It's covering the whole impoundment on foot before the hunt.  It's observing the birds the day before, what they like and don't like - especially what they're wary of.  It's a 3:30 AM wake up, even though you're staying a mere five minutes from the place, to get there first - there are no assigned blinds, it's a free for all.  It's hauling more than 100 decoys down a dike several hundred yards from the truck, then all the way across the impoundment.  You hope you're working down the correct cut through the impoundment in the dark.

These draw hunts over the years have been a learning experience.  Wheels are essential.  Taking the weight of guns and shells and blind bags off your back saves you, freeing up strength to haul more decoys.  My little red wagon lives on.  We even saw a guy, who got there after us, zip along on a Segway. 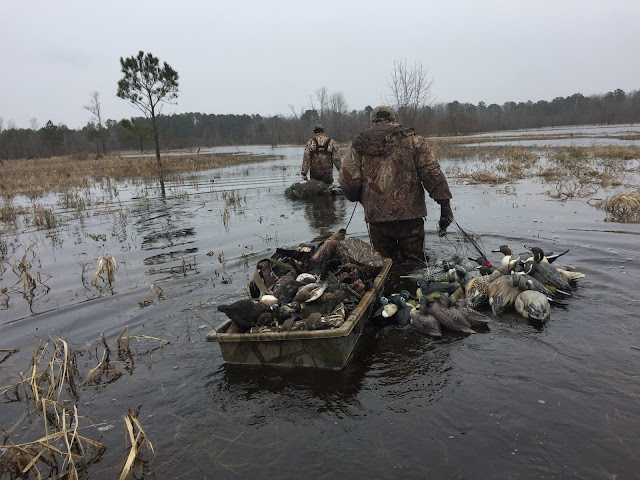 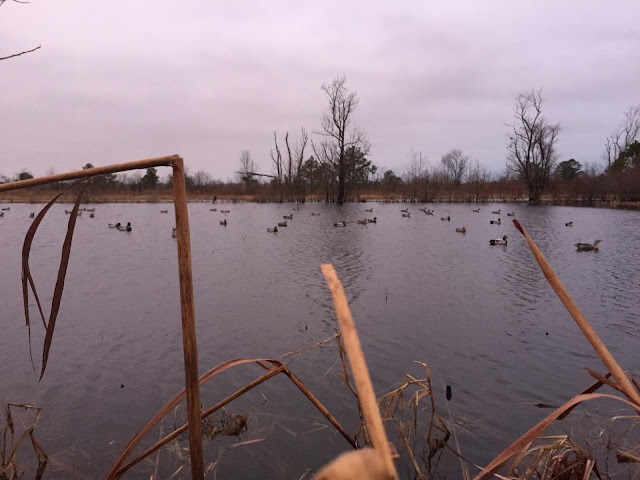 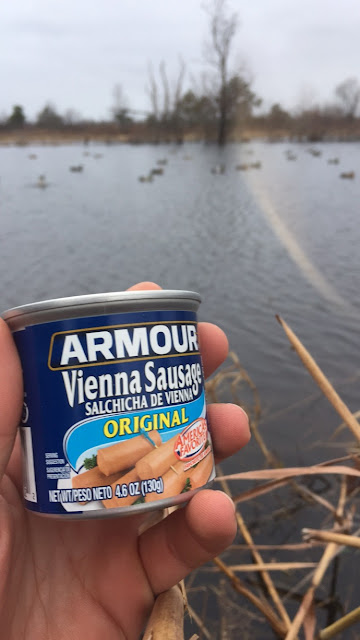 It's a competition.  Once shooting time begins, 6:42, it's competing for birds.  It's doing your best to convince those birds to come land in your spread, and not the other guy's. That's when hauling those decoys was all worth it.  Sweating through your long underwear and flannel shirts and jeans and jackets all under waders.  Just to have a larger spread than the other guys.  Not only a larger spread, but a smarter one too. You pay attention to the wind.  You group by species - ringnecks, mallards, pintails, widgeon, a lone bufflehead.  You leave pockets where birds can land.

Our spot is ideal.  A pine island, covered by reeds and briars and brush, with open water pockets in front and behind, before tightening up with native aquatic vegetation and some Jap millet.  It's not cool like Saturday.  This day it's cold, low 30's, made colder by spitting rain where the damp sets into everything you've got on.  And with the rain and clouds, the birds are flying low.

We expected more wood ducks.  We shot not a single one.  Instead, we were graced with hundreds of ringnecks, arriving in waves.  To put it simply - we could've limited out with 18 birds by 7:30.  Instead, we passed on some groups, groups so low and close it took all the willpower we had to not shoot.  We hoped for some big ducks.  Thankfully for us, our gamble paid off.  We picked off singles and several pairs, adding a drake black duck, some gadwall, and some widgeon to the bag.

I'm not saying we're duck snobs.  We all love ringnecks.  They decoy like a charm.  They're fast as hell.  And like any duck, they can taste great. But on that day, that morning, it was worth passing on a few blackjacks to be able to take those other birds. 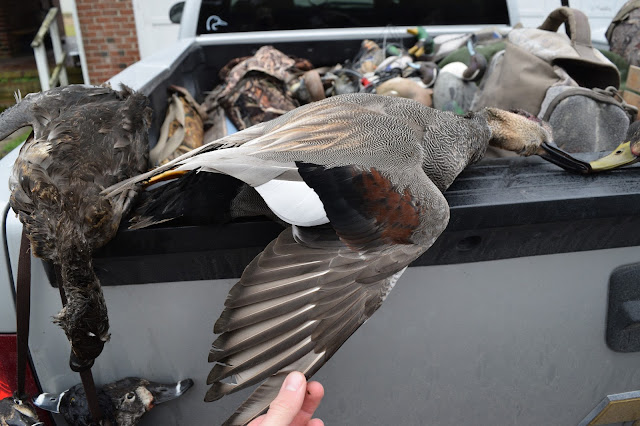 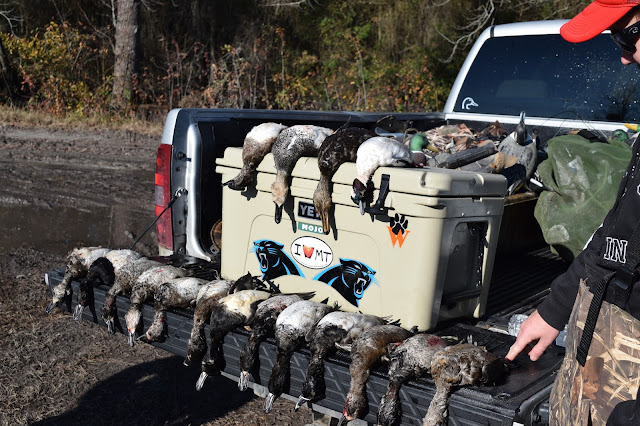 We picked up around 10:30, having reached out limit, and hauled all our gear and birds back to the truck.  We worked our tails off, but that's what makes it all so rewarding.  It's no easy game hunting on public lands, even on those that require permits.  Birds don't come without a little sweat.  So we packed up the truck, rolled into Columbia, and had a hot meal at the China King. 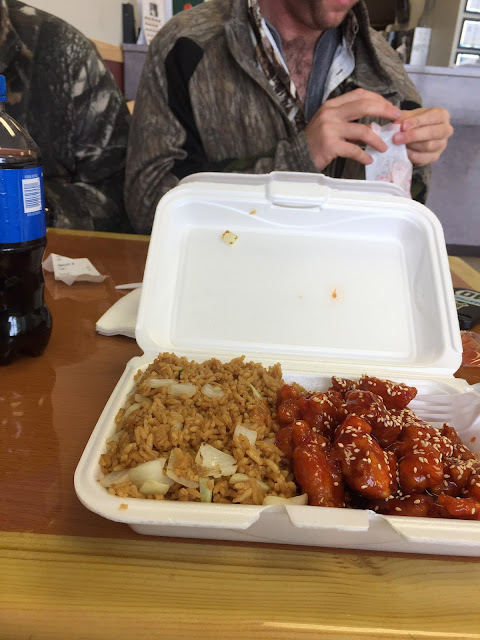 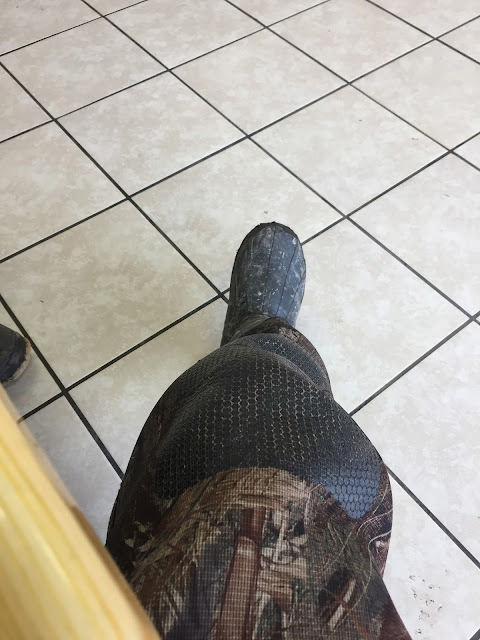 You know you're in the right place when you don't get too many surprised looks as you walk into a restaurant wearing waders, and charcoal from a burnt wine cork smudged all over your face for camouflage.

Our next draw hunt was a few days later, up on the Currituck Sound.