From the Carolina Swamps to the Flats of Belize 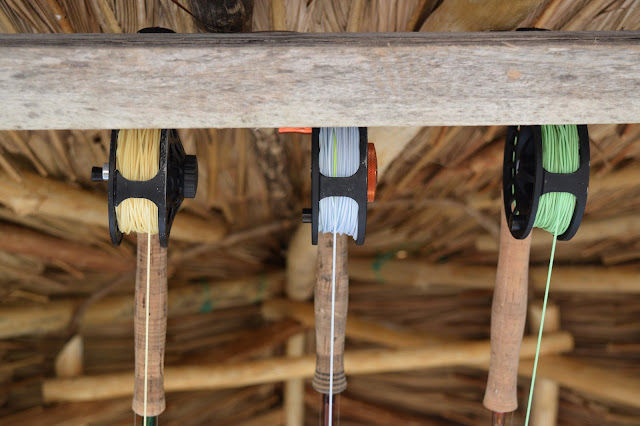 The Toyota truck's odometer gained more than 1,000 miles in the days before and after Christmas. Rolling down both country roads and interstates alike.  Wilson to Creswell.  Creswell to Knotts Island.  Knotts Island back to Wilson.  Wilson to Wilmington.  Wilmington to Laurinburg.  Laurinburg to Charlotte.  And finally, coming full circle, back to Wilson on the day after Christmas.

But almost as soon as we were back, we were gone again.  Now it was off to Belize.  We'd never really done a big family trip like this, and thankfully, there'd be some fishing involved.  With my brother, my mom, two of my cousins, and their mom, we'd be flying to Belize City, and then hopping on a Cessna Grand Caravan and flying half an hour out to San Pedro on Amber Gris Caye.

We rented a house through Airbnb, a ways south of town, past where the cobblestone streets turned to dirt.  It had rained before we landed, and the road had been torn up where the water had washed through.  But in other spots, where the rain collected and turned the road into a mud pit, it seemed like we were bogging through Eastern North Carolina lowlands.  We soon learned why the golf carts all had mud tires, and we eventually wound up at the house right as it got dark, with whoever was sitting in the back of the cart speckled and flecked with tan mud.  Hot and humid air and mud, I thought, reminds me of my stay in Nicaragua.  But once we got to the place, and we walked out on the dock, out into the Caribbean, that refreshing salt air swept all the unpleasantness away. 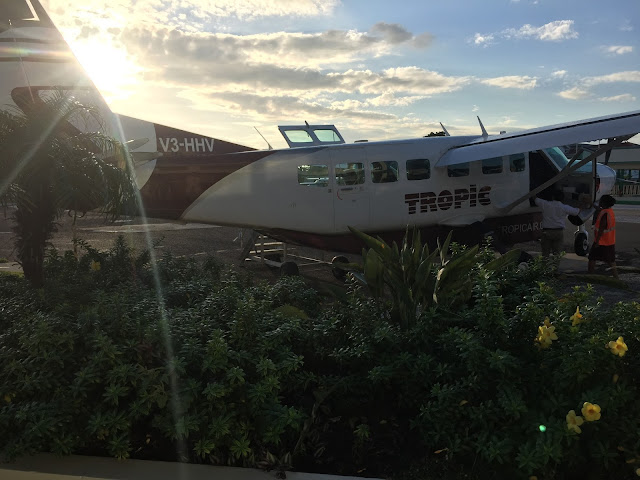 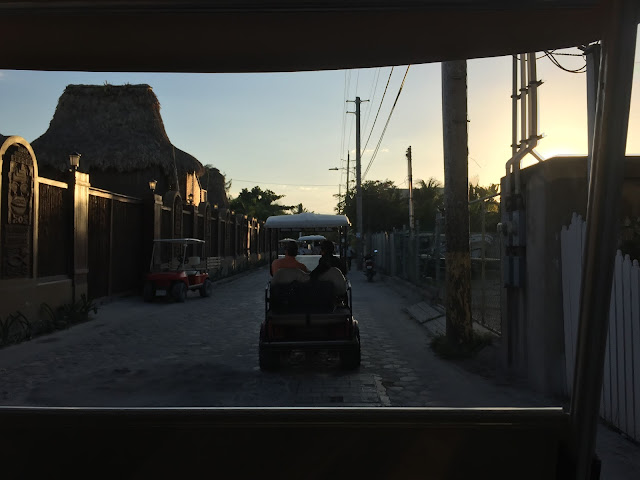 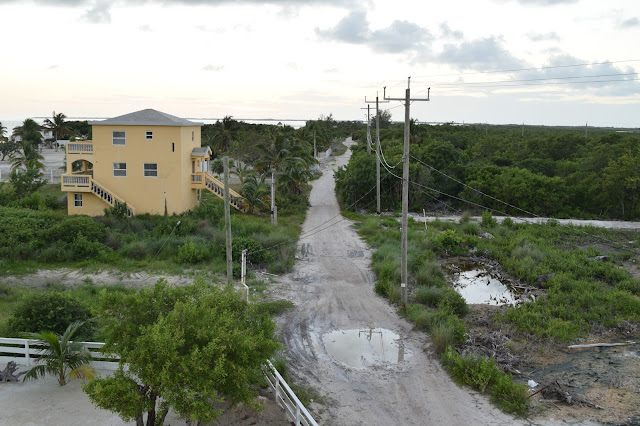 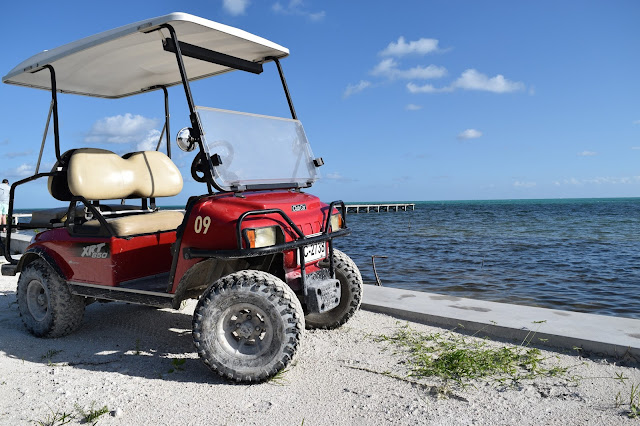 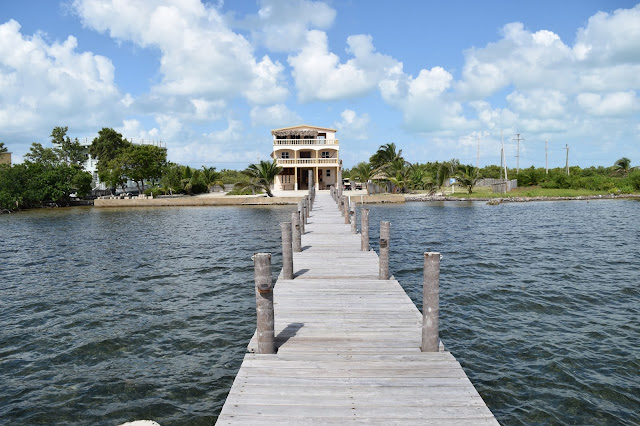 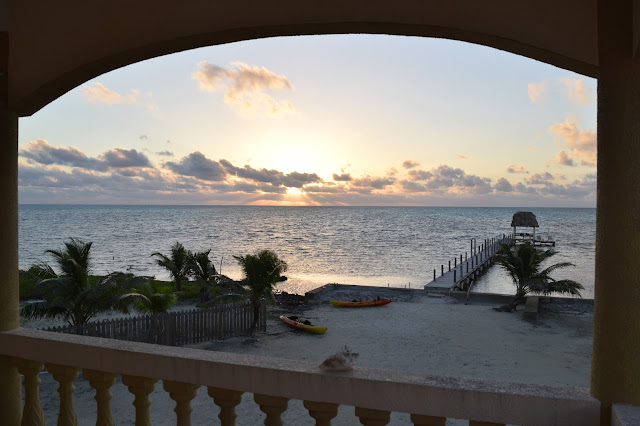 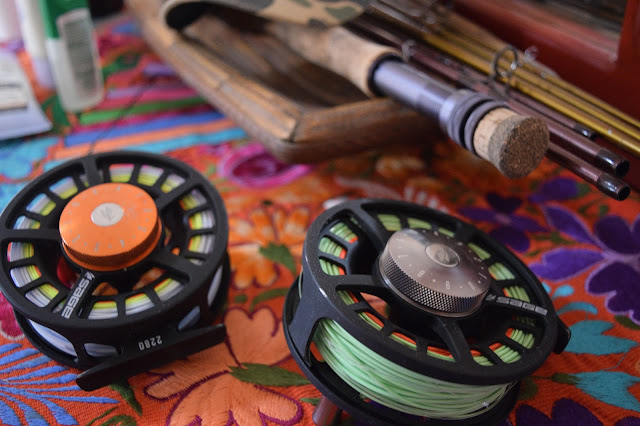 Thanks to my cousin Jay, we'd booked two days of fishing through Yellow Dog Fly Fishing with Wil Flack, the owner and head guide of Tres Pescados Fly Shop.  A well known guide who's been featured on in "Waypoints" by Confluence Films, Wil taught me a ton on my first real bone-fishing experience.  He's the real deal.  A guy who moved down to San Pedro when he was very young, and just started tying flies to sell.  A guy who's got a permit tattooed on his neck.  A guy who would take a canoe out into the giant maze of mangroves for weeks at a time (back before development had taken its toll).  He'd stash jugs of water throughout the mangroves and flats, fishing all day, learning the tidal creeks and ponds and lagoons of the ecosystem where he now guides, and then sleeping in his canoe under a mosquito net.  He's also featured here, in this episode of Wild Instinct Outdoors:

Instead of blind casting into large "muds", where schools of smaller bonefish devour small crabs and shrimp and practically guarantee bringing countless fish to hand, Wil took Jay and me to several flats, where we threw on the wading boots, left the skiff, and hunted bigger bones on foot.  It was sight fishing, in hopes that we might come across some bigger fish, cruising or tailing in the gin clear shallows.

Of course this meant, moving slow, disturbing as little water as possible.  We fished as a team.  Three of us.  One rod.  The angler was on the right, rod held out and to the right, at the ready to roll cast, crab fly held in the left hand.  Wil was on the angler's left, managing the fly line, eyes scanning the bottom for small muds created by a few feeding fish, or dark moving shadows of cruising fish, or even better, the fin of a tailing fish, a fish rooting along in search of food.  And whoever wasn't fishing did their best to spot fish too. 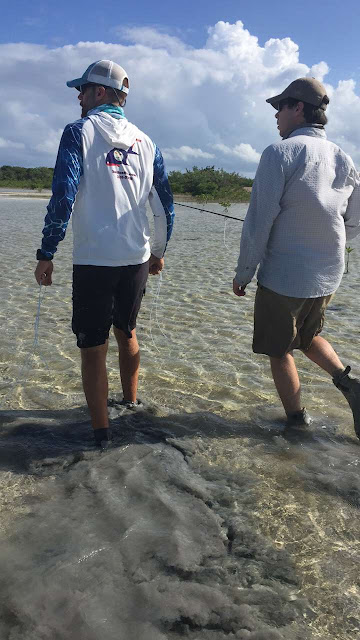 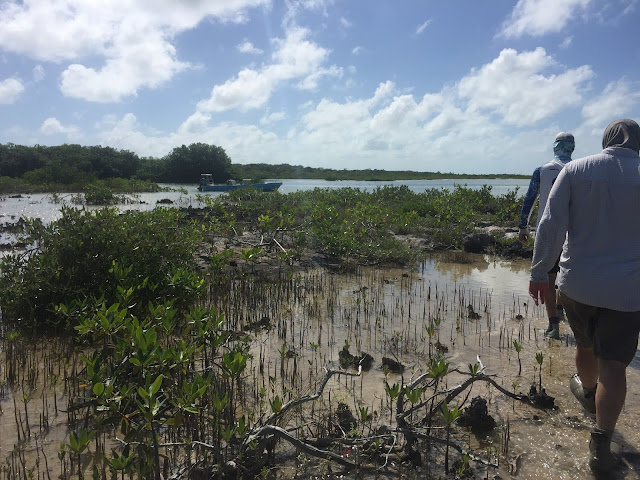 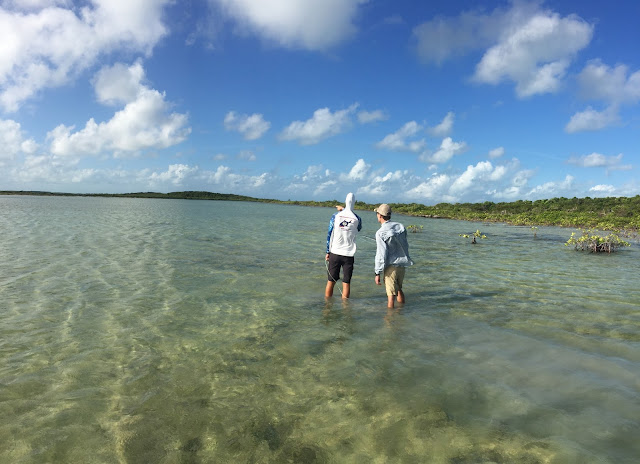 For me, that was the biggest challenge.  Reading the water.  And next came learning where to place the fly, how to strip the fly, and how to set the hook.  You had to lead a cruising fish, not dropping the fly on his head, but not leading him by too much.  You had to move the fly with small, short, slow strips of the fly line - too fast and too long of strips would suspend the crab too high in the water column.  And of course, the you had to strip set - no lifting of the rod with the traditional "trout set," no stripping hard, either, as I'd come to do for bass and redfish.  All it was was a slow pulling back and bending the elbow in the left arm.  Let's just say it took some practice after trout fishing Wyoming all season. 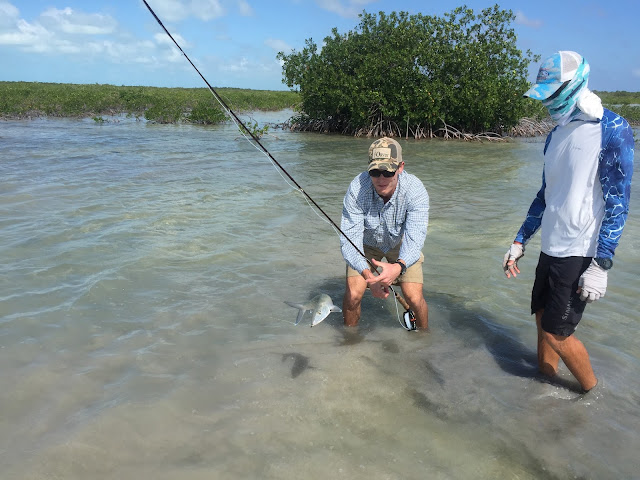 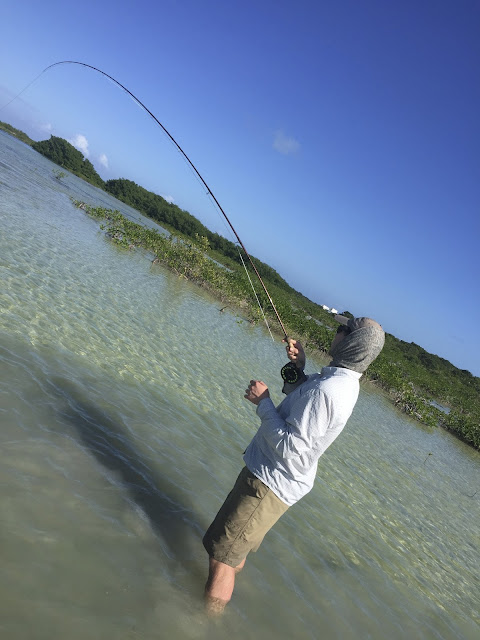 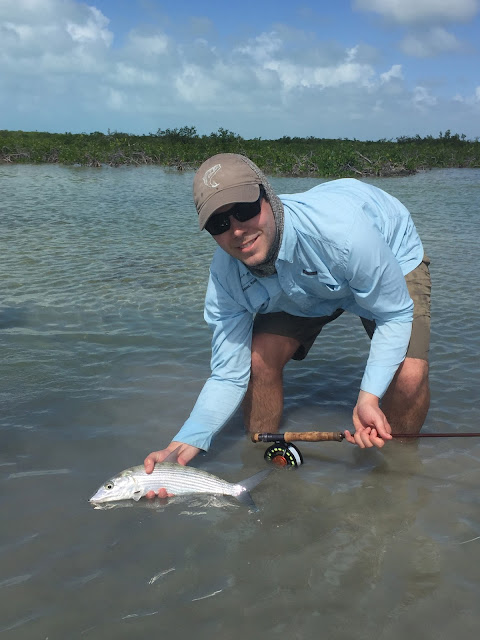 But once you got the rhythm of the retrieve and the feel of the take figured out, it was hard to beat.  Nothing like having a fish peel line off a reel like that, having to keep him off rocks and away from mangroves. 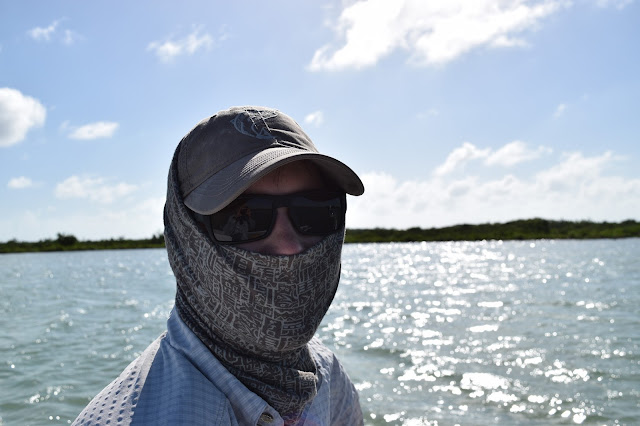 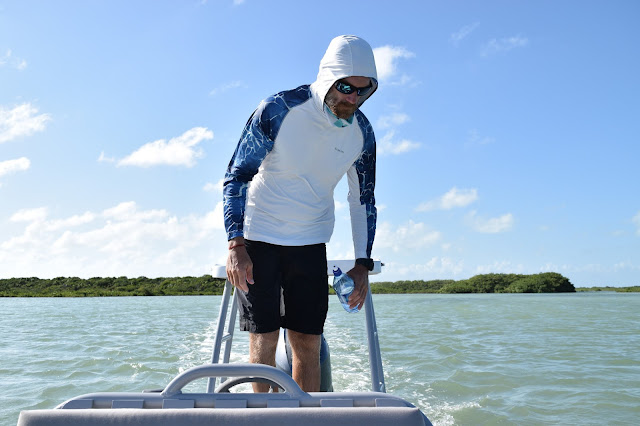 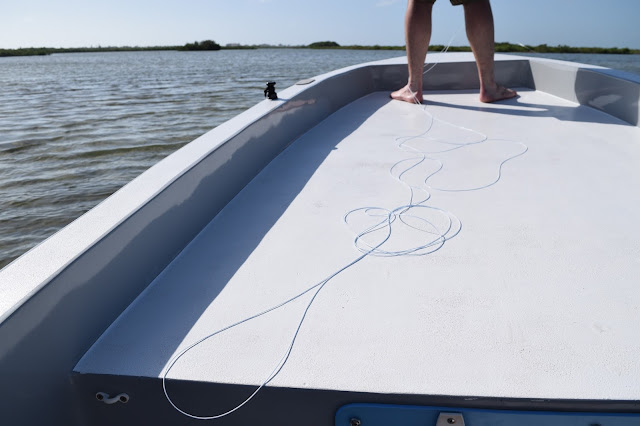 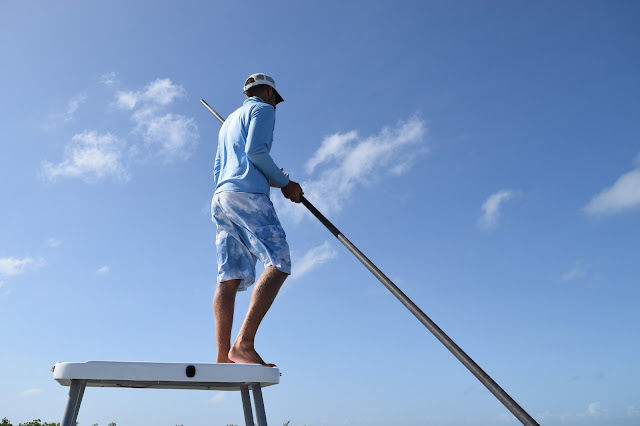 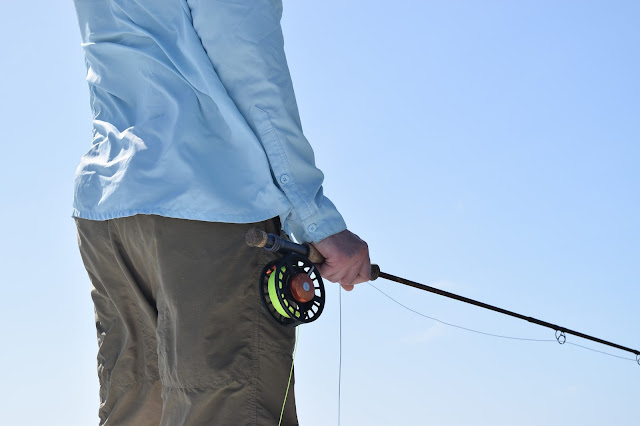 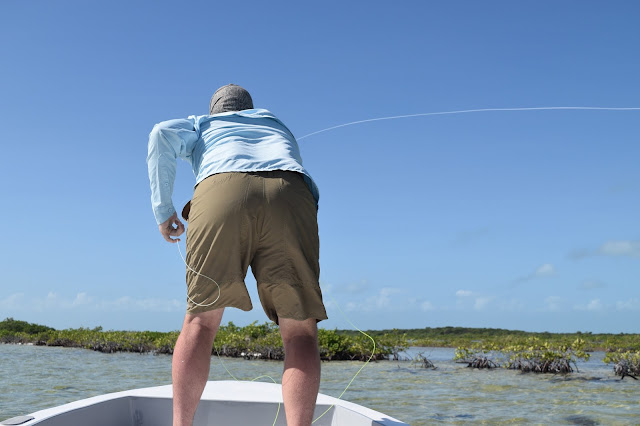 Besides two great days of fishing with Tres Pescados, we explored San Pedro, we checked out an old Mayan site, and just enjoyed the sun... trying to ignore the warnings of a winter storm back in the states. 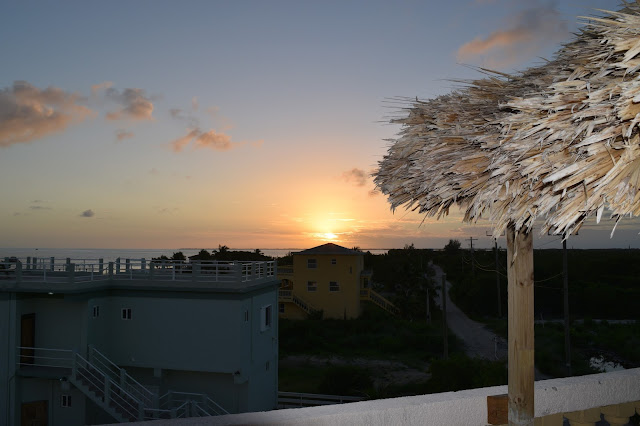 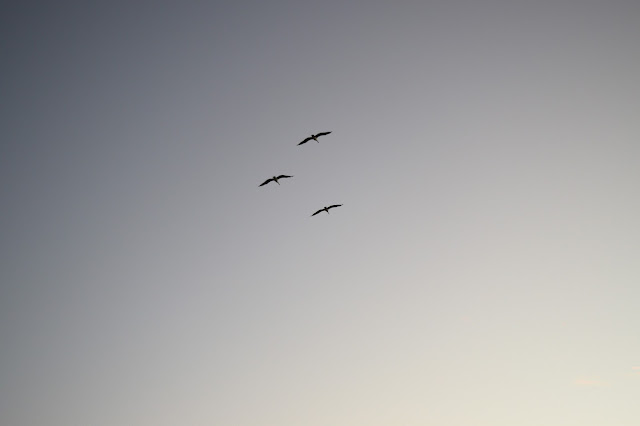 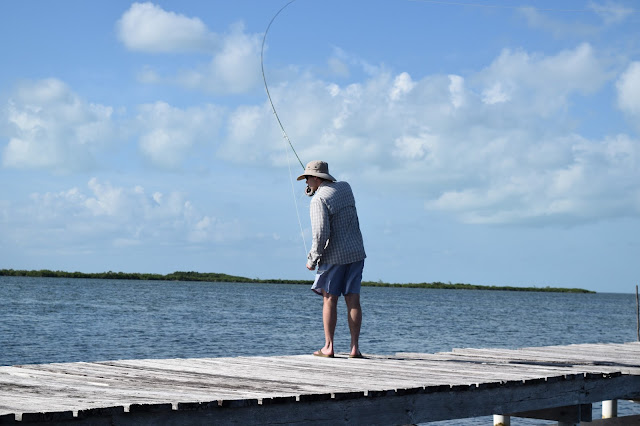 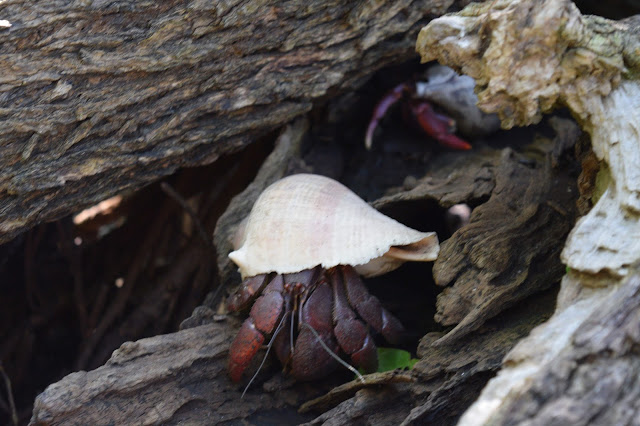 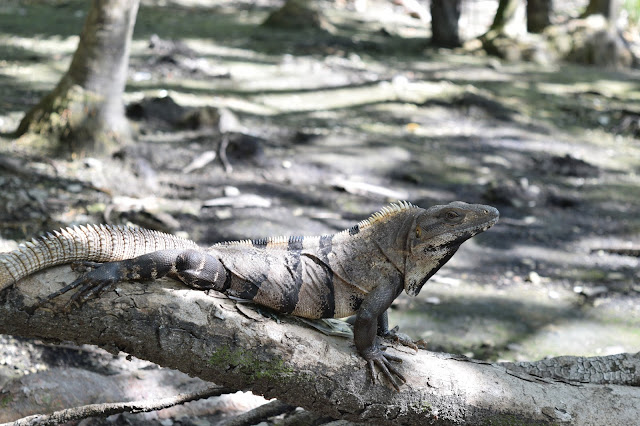 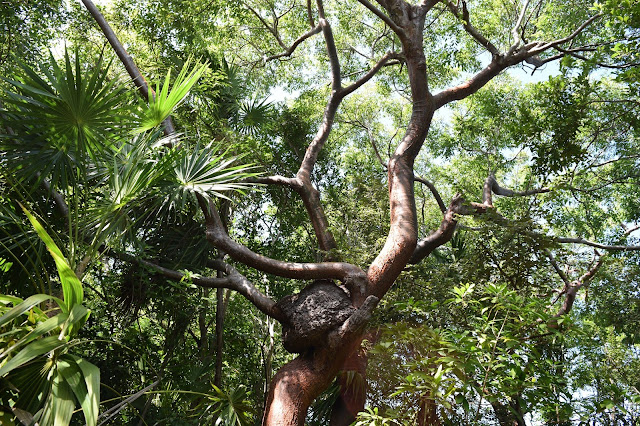 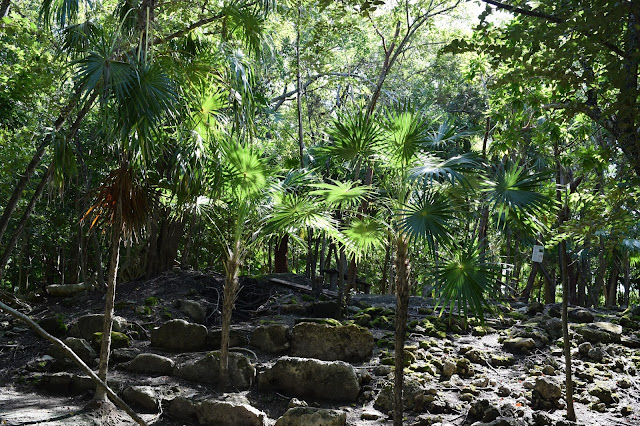 We sure ate well, too. 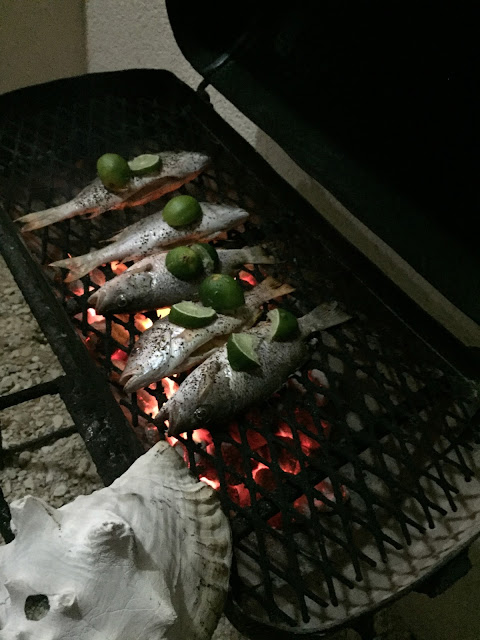 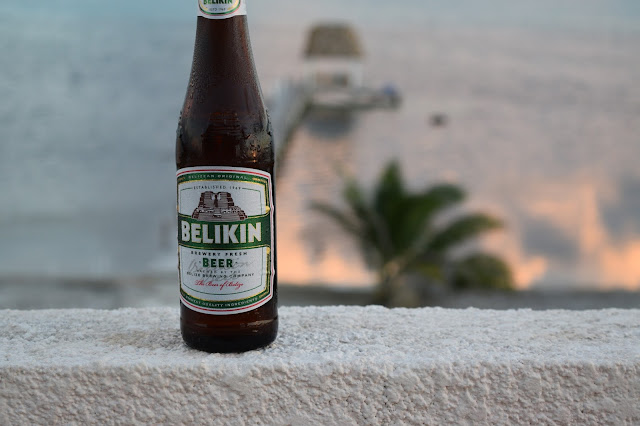 And on the final day came the consolation prize.  Messing around off the dock, I was trying to see how much line I could cast out, out into the wind.  After casting about as far out as I could, I casually let the fly sink, a simple bass and redfish fly, simply some lead eyes, brown bucktail, and orange rubber legs.  While I wasn't fishing too seriously, I heeded Wil's advice - of stripping short, "One, two", and slow.  A few strips in, there was resistance, and it didn't feel like the stationary catch of turtle grass.  I slowly set the hook, and as soon as I did, line started peeling out, and the fish was almost instantly into my backing.  After some fifteen minutes, we finally saw what had taken the fly - a permit.  I'd had no expectation to catch one...

From that point on, I took it easy.  We weren't going to lose this fish, a fish that many anglers won't catch until after several years of persistent fishing.  Landing the fish was a team effort, as I passed the rod tip and leader to my brother, and I grabbed the permit by the tail.  Now this was hard to beat.

It's what fishing and hunting is all about... you never know when the totally unexpected might happen.  It could be a permit inhaling your bass fly, or a dinosaur brown trout smashing your cicada carp pattern. Now, I'm sure, I'm in debt to the fishing gods. 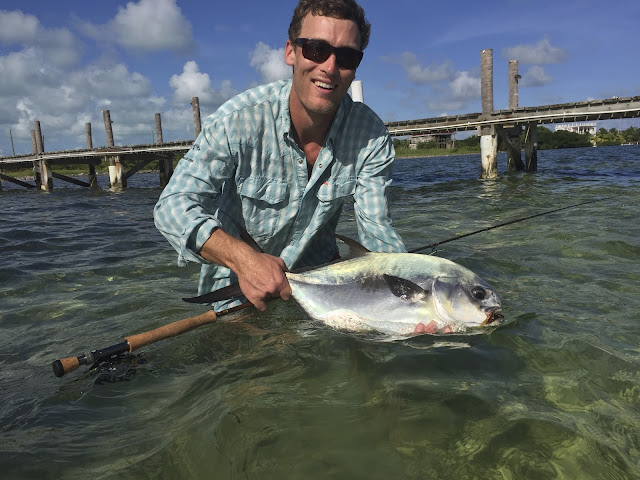 And as soon as it began, it was over.  Just as the fish returned to the flats after falling for some feathers and fur, we had to return to the states.  And we made it, barely beating the snow, after hopping on an earlier flight.  From Belize to the freeze.

Posted by robdanielh at 2:25 PM